Once upon a time there was a safe topic of conversation. It was called weather. Folks that would not, could not agree about politics or religion all talked about the weather. It simply was.

Some liked snow – others did not. Some loved the gentle fall of rain while others complained there had been too much and it was drowning the crops/flowers. Some liked the hot weather. Others, like me, not so much.

Everyone talked about the weather but nobody did anything about it.

Now it seems that if you don’t believe in Global Warming you are doing something about it. Something bad.

Back in those good old days when we had to walk to school through 10 foot of snow, uphill both ways, the weather simply was. And yes, we did complain about it. A lot. But we didn’t blame the weather on other citizens, even Republicans.

Now the weather is also the fault of those knuckle-dragging Republicans who are responsible for drowning polar bears. What kind of monster wants to kill polar bears? They are so soft and fuzzy and have all those big teeth and for crying-out-loud they are bears. Big mean bears. I don’t want to kill them but I don’t want to find one rummaging in my garbage cans thank you very much. Any critter that eats seals is never going to be among my favorites. Funny the things some liberals will clutch to their breast, rhetorically,  in order to make other seem like heartless folk.

And in spite of all the hysteria about us knuckle-dragging unbelievers, I’m an Independent but unbelieving Independents are knuckle-draggers too, polar bears seems to be doing just fine. Alas poor Al, that’s an inconvenient truth.

It is increasingly obvious that polar bears are thriving despite having lived through summer sea ice levels not predicted to occur until 2050 – levels of sea ice that experts said would wipe out 2/3 of the world’s polar bears.

We had snow again last night. A lot of snow. There was a big winter storm that stretched from God knows where to we’re all going to die. It even had a name now that some idiot decided winter storms need a name. I don’t know what this one was named. I don’t care what this one was named. It’s a damn snow storm and it left about 6 inches of snow  where we had just finished removing snow. It filled in all the nice edges of the sidewalks and driveway which were nice and clean.  I have a name for it – #@c%(*y$@!!

However, it was a snowstorm not Armageddon. Weather folks seem to find increasing delight in turning every bit of weather into Armageddon. Too hot, too cold, too much rain, too little rain, snow, no snow whatever the condition they have an Armageddon scenario for it. I just want the damn weather report not the posturing of some catastrophist.

I like snow. I like it about two days before Christmas until New Years Day. Then I just want it to go away. Snow that stays very long gets gray and dirty and ugly. And once the Christmas Card look is no longer wanted – it is no longer wanted. At least by me. It is a perfidious malingerer that wants to be coddled and shoveled. And snowblowed by over-grown boys who think it’s fun to blow snow with their big noisy boy-toys.

To be fair the man/boy I live with has a new cordless electric snowblower because we don’t like noisy and we don’t like keep gas cans in our garage. Man/boy pouted through the early part of winter because he had this lovely new machine and no snow. What little there was came light and fluffy and I usually swept it off the sidewalks. The driveway was none the worse for 1/2 an inch of the stuff.

Now the snow has come in increments. Snow – snowblow and shovel. Wait a few days – rinse, lather and repeat. After a few repetitions the man/boys loose their enthusiasm.

We actually are quite lucky. Although there appears to be about 6-7 inches of new snow that is nothing compared to what was dumped elsewhere.

Chicago’s two biggest airports, O’Hare and Midway, had hundreds of flight cancellations on Friday – some of which were canceled on Thursday before the storm arrived – because of Mateo, FlightAware reported. More than 200 flights were also canceled Friday morning at Detroit Metropolitan Airport.

storm, city officials announced. Numerous school districts in Nebraska and Iowa also canceled or delayed schools Friday because of the snow and frigid temperatures, according to the Associated Press.

“Periods of heavy snow will arrive into Friday across the southern Great Lakes,” said weather.com meteorologist Jonathan Belles. “Friday morning’s commute could prove difficult in Chicago and Milwaukee, if not impossible for some spots. Visibility will be reduced due to falling snow from Chicago to Detroit on Friday.”

The winter storm also caused issues in Montana. After more than a foot of snow fell in Havre, city officials warned residents in a Facebook post that roads were “extremely hazardous,” and there were many accidents and stranded vehicles that blocked roadways on Thursday.

I am not one of those who feels better about my particular condition because someone else is worse off. So knowing that some people got a foot of snow makes me feel no better. It may make me feel like a wuss for complaining but not for long.

And I’m sorry but I just don’t care that  the Eiffel Tower Remains Closed as Snow, Freezing Rain Hits Paris.

If you look at the weather map below you will see the blue zone, signifying heavy snow, just barely touches Wisconsin – that’s where I live.

Our household, made up of one old bat and one old crock did what we’ve always done when a storm is predicted. We went to the store, got bread, milk, bird seed and ice melt so that we wouldn’t need to go out today when the roads are bad. Since we’re both retired we can sit inside and watch those that have to go out and sympathize with them.

We can watch the fools that don’t have to go out but went out anyway and shake our heads at their foolishness. Just as we’ve always done because fools are not a new phenomenon. 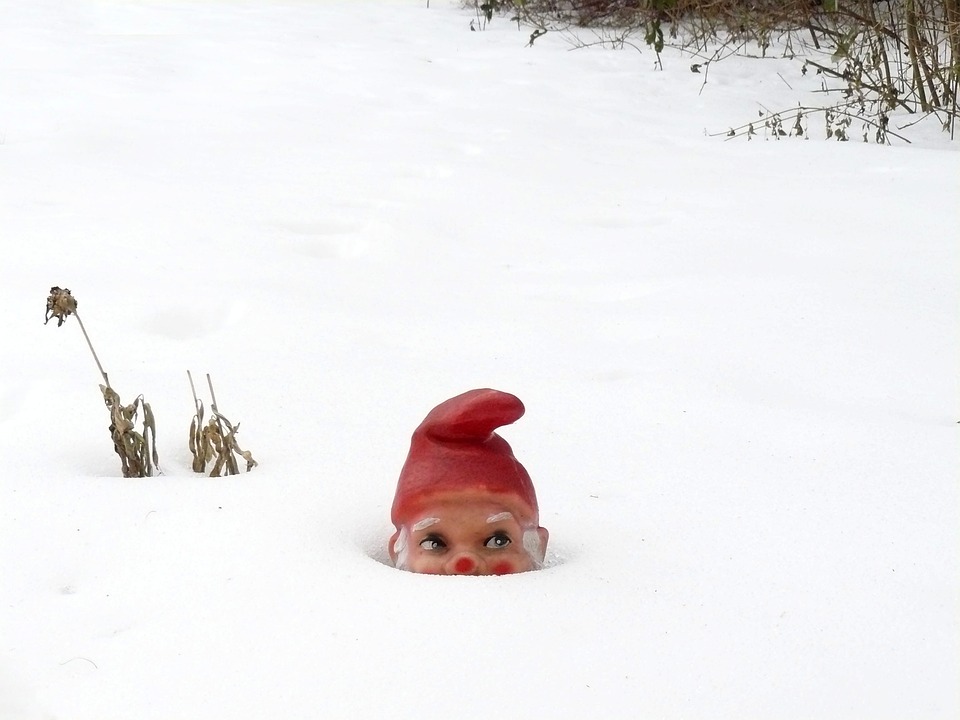 I waded through the snow to feed the birds and squirrels. Since I am getting shorter, shrinking at an alarming pace, the parts of me that get wet and cold go further up my tailpipe every year. By next year I expect to be the size of a garden gnome and will not dare venture out if there is more than an inch of snow.

Wherever you are, snow or no snow, warm or cold, be well. I hope your day is filled with whatever you like best. As for me, I’m sitting here where it is warm knowing I don’t have to go outside again today. I don’t have to use the snowblower. All is well. And it’s still snowing.