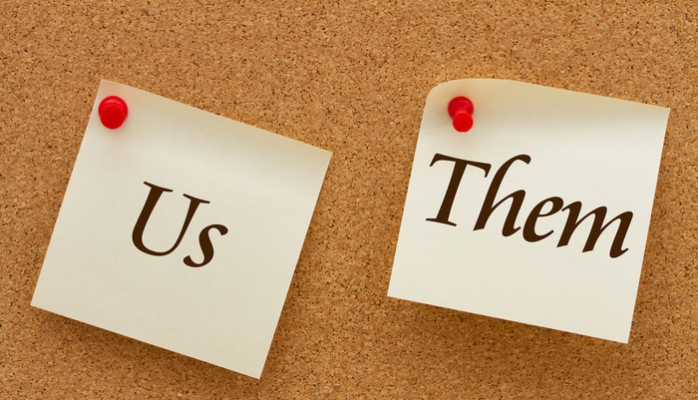 When disaster strikes our fellow citizens “we”, the good and decent people, want to help. Thousands help others as best they can and our newest heroes may be a neighbor with a bass boat.

Good people drive from nearby states or from far away states to help. Neighbors unaffected feed those who are storm tossed and cold and hungry and unable to go home. 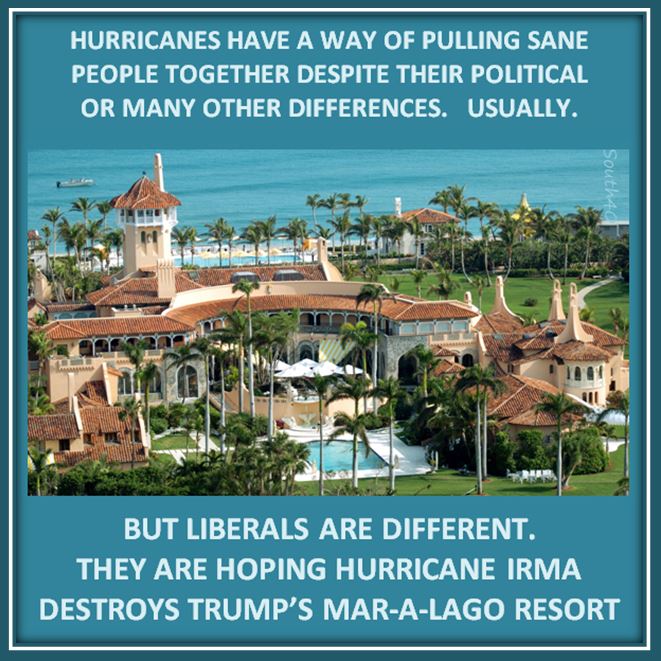 Guess the term “Locked and loaded” is suddenly okay again.

Millions of people are being asked to evacuate because of the biggest storm in Florida’s history, and you make it about Trump’s property.

Luis Hernandez @hernandezlg
And they wonder why people hate the press…

This is also them:

So who would be cold-blooded enough to savage hurricane victims? Rabid sufferers of Trump Derangement Syndrome (TDS). These are people who were so blindsided by a Clinton loss that they can’t see past their election night rage and are wishing destruction on all the Trump voters in Florida along with Trump properties. I don’t want to be neighbors with these kinds of people anymore.

This is also them: 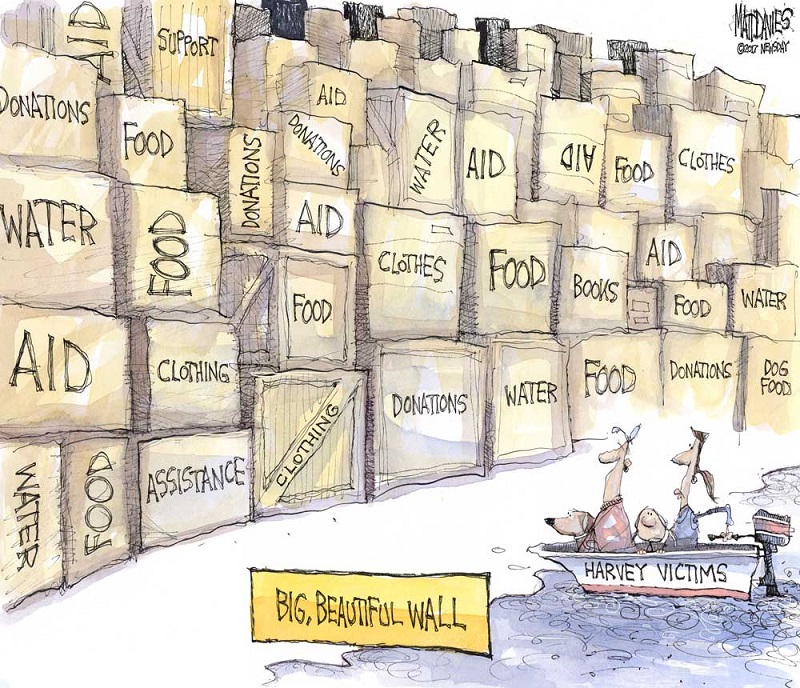 I don’t even know what this cretin below is  –  Human being? Barely.

As Texans reflect and recover from the devastation that came with Hurricane Harvey, comedian Bill Maher told his audience Saturday night that the survivors have no right to ask for federal aid. Texans have a “low tax base,” he argued. Oh, and they don’t believe in climate change. Why should Washington bail them out?

We don’t need A.F. Branco to tell us this about the climate change crowd. But he does it with such panache. Needless to say, he’s one of us.

And this is, once again, them: 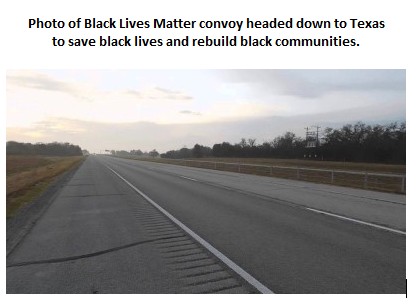 While I usually excoriate the ignorant celebs who will not stop talking about things which they know little or nothing about,  there are a few, a very few, who actually have a brain.  And knowledge.

People that know what they are talking about and have the courage to speak out knowing full well they may never work in “tolerant” Hollywood again. James Woods is one of us. And he’s one of the smartest of us with a wicked way with retorts. 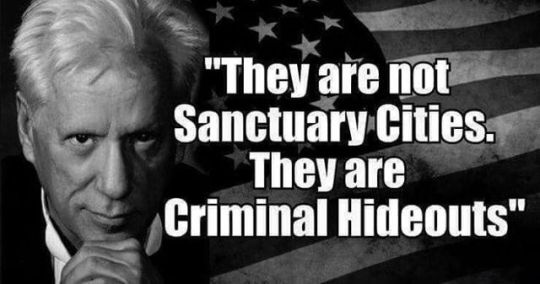 Coming at us from the left are folks that supported this woman who, if there were justice in this country, would be facing a grand jury. It’s just my opinion but liberals may “think” they’re the smartest people in the room but like so many other things, they’re wrong about that. 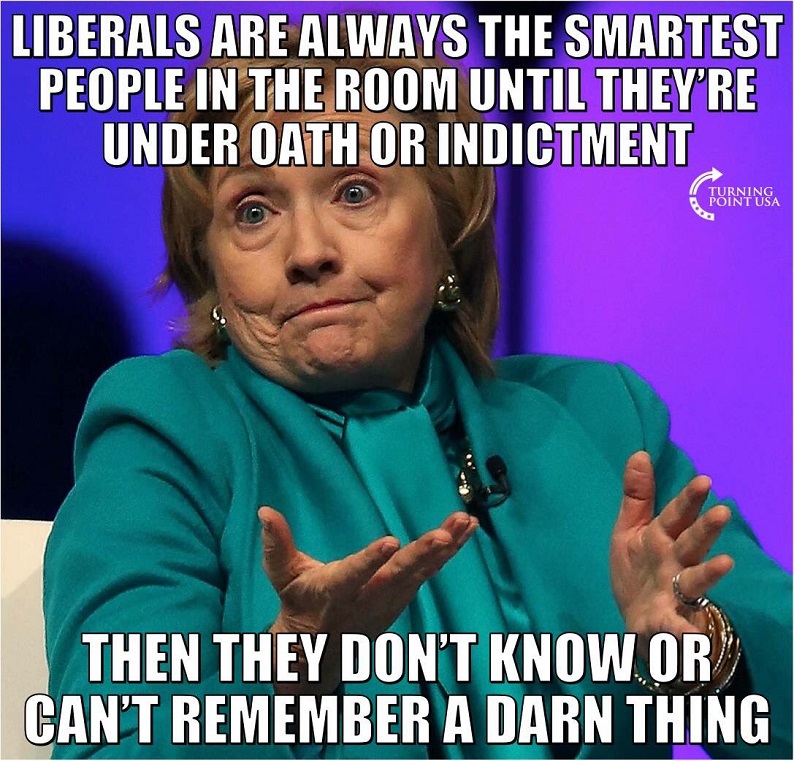 Do you like the idea that some travelers from another world would look at us, at this time in our history, and find us ignorant savages? The image below made me think about that. 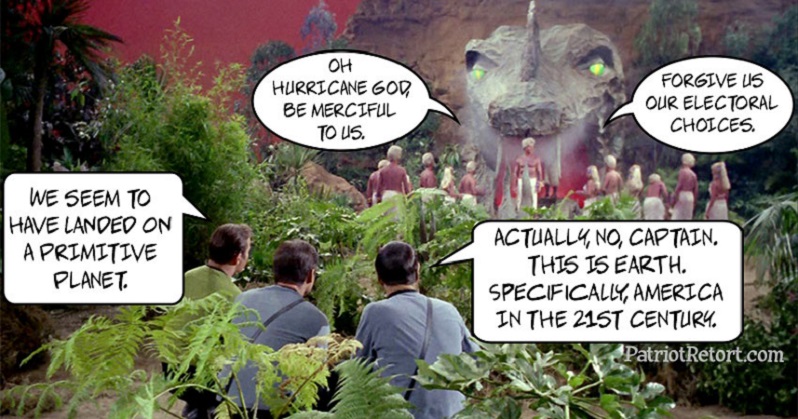 We always hear that the “world” is watching us. Maybe the universe is watching us and have decided, via the “Prime Directive” not to interfere in our culture until we pass the primitive and barbaric and have advanced sufficiently to join them. We seem to be stuck in “tribal” in spite of all our technology.

Note to public – having a “smart” phone doesn’t make you smart.

If we want our claim of being good, decent people to have any validity then we must be fair. We must not rush to judgement and we must not fall victim to hyperbolic language. Too often I read on blogs that “all” liberals are bad, evil, stupid, or some other derogatory remark. How does that make us different than those on the left that claim all Trump voters are bad, evil, stupid or whatever?

Or Hillary calling those voters deplorable?

I want the image below to reflect us: 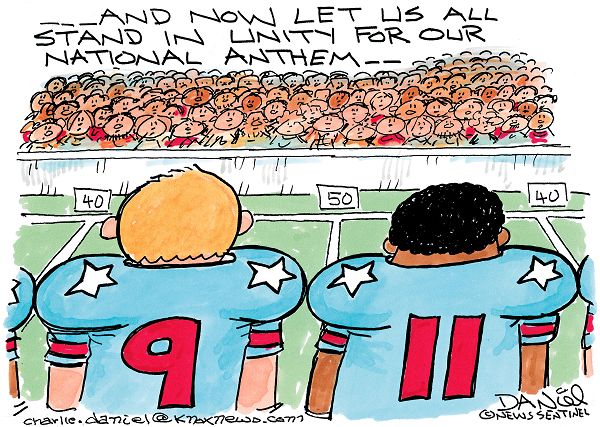 There are plenty of nasty small-minded people on both sides of nearly every issue. Most politicians cannot be trusted to keep their word and that makes them one of them 😈 not one of us 😇. Hero worshiping a politician is like teenagers worshiping some celebrity or sports figure – not suitable adult behavior.

Good decent people don’t wish bad things to happen to other people. We may not want bad people to win elections or run our schools or feed us tripe and call it news.

Both of my neighbors are Democrats. One is a loud mouth that we can barely tolerate, but we do for the sake of peace. The other does as we do and usually keeps his political opinions to himself. This year he and we pretty much agreed that voting was a waste of time and energy since there were not good options. He didn’t vote at all, his wife voted for Hillary and we voted Evan Mcmullin and that was a waste too since he’s turned out to be a nitwit.

But when winter came we helped each other with shoveling snow, as we do every winter and when they go on vacation we watch their house. It’s the neighborly thing to do. Should we not because she dared to vote for Hillary? Or are we Americans that believe in freedom and that she has as much right to vote for Hillary as we did for the nitwit?

I try very hard not to be one of them. I know there isn’t even a chance that I would wish a hurricane or any other of natures horrors on anyone. The worst I tend to wish on those I don’t like is laryngitis or hemorrhoids. And that’s mostly for politicians and media types.

The cartoon below is what we mostly are and should strive to be. Let’s not let them 😈 make us 😇 less than we can be.

Ephesians 4:32 – Be kind and compassionate to one another, forgiving each other, just as in Christ God forgave you.